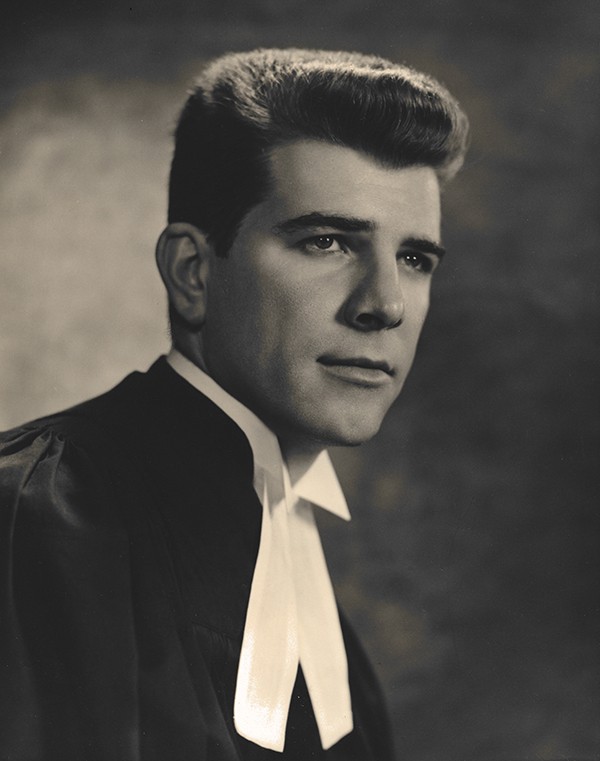 Life member of the Law Society of Upper Canada.

In Memory
In Memory

With sad hearts the family of John Paul Filipovic announces his passing on July 19, 2019 at the age of 90.

John Filipovic was born at the Port Arthur General Hospital in 1929. His father, originally from Croatia, moved to Canada at the age of 17 years and established himself in Port Arthur running the Princess Hotel, where John, as well as his two brothers and sister had their first jobs. John attended Port Arthur Collegiate Institute where he was successful academically and in sports as the captain of the high school basketball team and played junior hockey.

After high school John attended St. Michael’s College to complete his BA and then entered Osgoode Hall to earn his law degree and was called to the Bar in 1955. This was a very proud event for John’s father and family as John was the first of those in the local Croatian community to earn a university degree.

After being called to the Bar in 1955 John worked as a lawyer for 2 years in Toronto but returned to Thunder Bay to start his practice. By the time John retired he had enjoyed partnerships with various lawyers but was most proud of the near 20 year law firm partnership he had with his son, Daniel and daughter-in-law, Samantha.

As a senior lawyer of the Thunder Bay Bar John has always been recognized as a kind and compassionate person to give of himself to his clients and to his community over his life as an active member of the Croatian Home Society, the International Order of Alhambra Catholic Fraternity to assist those with developmental needs, the Port Arthur Gyros, the Kinsmen club, as a past president of the Thunder Bay Law Association, as an executive member of the Thunder Bay Flyers Hockey Association, the West Loon Lake Campers’ Association, Trustee of the Thunder Bay District Catholic School Board, member of the Prostate Cancer Canada Network [Thunder Bay Chapter], as a director of the St. Joseph Care Group and various bridge clubs.
John’s love for the practice of law continued even after his heart attack in December 1999. Though the pace of work may have slowed, his goal to provide quality service and advice to his clients never wavered. It was common to observe his clients express heartfelt gratitude as clients and as friends and add something extra to the “fee” such as home cooked meals, freshly plucked chicken or baked goods.

In 2004 the Thunder Bay Law Association honoured John Filipovic with a Service Award for his meaningful contributions to the local Bar and his community. In 2005 the Law Society of Upper Canada granted John a Life Membership for 50 years of good standing in the practice of law.

John leaves behind his loving wife of 68 years Marguerite (often lovingly referred to as his Babitsa), his daughter, Sharon Elsey [Dan], his son, Daniel Filipovic [Samantha], his son, David Filipovic [Denise] from Sudbury and his daughter Tracey Jewiss [Marc] from Ancaster and nine grandchildren, Steven and Jamie Elsey, Mathew, Ryan and Michelle Filipovic, Tyler, Trevor and Robbie Jewiss and Noah Filipovic. Also surviving John are his sister Ann Racic and brother Frank Filipovic and many nieces and nephews in Thunder Bay, southern Ontario and Tennesse, USA. John was predeceased by his parents, Ivan and Marija Filipovic, and his brother Nick Filipovic.

During John’s stay in the transitional care unit at Hogarth Riverview Manor he was surrounded by caring staff and the family thank Dr. Skunta, Hilary, Vanesa, Kelsey, Cathy and all the nurses for their understanding, compassion and kindness in caring for John throughout his stay.

Funeral services will be held at 1:30 p.m. on Saturday August 3, 2019 in the Chapel of Harbourview Funeral Centre presided by Rev. Fr. Ciaran Donnelly. Visitation will begin one hour prior. Inurnment will take place at a later date in Our Lady of Charity Mausoleum, St. Andrew’s Cemetery. Should people prefer, donations may be made to the Alzheimer Society of Thunder Bay or the Thunder Bay and District Humane Society.